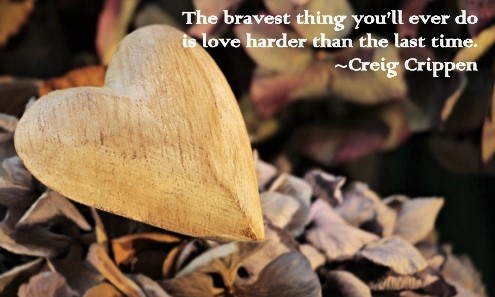 That’s the love nudge I needed.

Loving harder requires a lot of courage and vulnerability…and trust.

A nugget to tie in from a previous blog…we are called to love the PERSON, free of their choices, actions or words.

Now to take this into personal relationships…what a doozy! I find myself challenged by setting boundaries between loving the other person without excusing their behavior while honoring my needs at the same time. It’s one thing to focus on loving the person for who they are and not what they do. That alone takes constant awareness, compassion, gentleness and openness. But my general tendency leans towards excusing their behavior because I have an understanding of what they have been through. This is an act of collusion rather than love. Collusion isn’t brave. Collusion is fear-based. Collusion is allowing someone else’s behavior to be “ok” because they have been through a lot or are really struggling right now or because they aren’t aware of what they’re saying or doing; allowing the ‘cover story’ to stay intact without holding it to the light of integrity.

With that being said, my challenge is to release any bitterness or resentment around the choices made-theirs AND mine-so I can love harder than the last time. To me loving harder requires the vulnerability to step into possibility…again…and again…and again. Loving harder is about releasing the past and letting the present unfold…free of the past. Dragging the past into the present doesn’t serve anyone. Ever. Letting the familiar, seemingly predictable, behaviors dictate present interactions is the opposite of loving harder. It is fearing more; setting up a denser resistance.

Loving harder is also about loving myself harder; trusting that I can love another without being shattered. Loving harder than the last time is about forgiveness, too. Forgiveness: letting go of the hope that the past can be anything other than what it was. Loving harder than the last time requires finding that vulnerability within to forgive and learn from the experience. Forgiveness tends to be more for me than the other person. I need to forgive myself after an honest look and acceptance of my role in the situation. I also need to forgive the other to release the anger, bitterness, resentment or any other hot emotions that ultimately only harm me. Hanging onto those emotions builds a wall, typically around the heart, preventing connection through love.

Are you feeling brave?

Can you love harder than the last time?